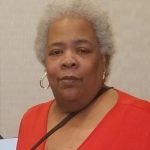 Dean confessed a belief in Christ at an early age and was baptized and joined Zion Springs Missionary Baptist Church. She later united with True Love Church, under the leadership of Pastor Eddie White where she rendered faithful service as a member of the Hearts of Love Women’s Ministry. She was a dedicated employee of the Social Security Administration until she retired in 1996.

Dean was the family babysitter (for both children and pets), kept in touch with every family member and was known as the family know it all. Dean was an avid reader, loved Jeopardy and was a huge college sports fan, ROLL TIDE!