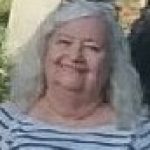 Visitation will be 6 – 8 p.m. Friday, September 6, 2019 at Caldwell Tutt Memorial AME Zion Church, 1702 National Drive, Jeffersonville, IN.  Burial will be in Reynolds Cemetery in Greenville, KY.

Our dear, loving Pat was born in Champaign, IL, during WWII.  She grew up in South Bend, IN, graduated from St. Joseph High School, and earned her BA degree in English at Rosary College (now Dominican University) in River Park, IL.  She was selected as editor-in-chief for both her high school and college newspapers.

Right out of college Pat signed up with VISTA, the Volunteers in Service to America, also known as the domestic Peace Corps, and was assigned to Louisville, KY.  In the 1970’s she worked with the Kentucky Commission on Human Rights and wrote Kentucky’s Black Heritage, a book intended to supplement standard history texts in public schools. In the 1980’s she became executive director of Big Brothers and Big Sisters, first in Columbus, IN, and later in South Bend.

In the 1990’s, Pat started working for the City of Louisville, first as a Court Designated Worker case manager, and later was promoted to supervisor of the Self Sufficiency Program. Pat devoted her life to lifting people up and helping them along.

In her later years Pat bravely coped with the death of her husband Sylvester and with some serious health issues.  Her death was a terrible shock and leaves us with a sadness that is difficult to bear,  but the enormity of our loss is commensurate with the wonderful love which Pat gave us in her life and which will always be with us.

May she rest in peace.