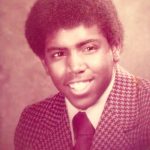 Dwight grew up in Grand Rapids, Michigan and East Lansing, Michigan and was a graduate of East Lansing High School. During this time Dwight distinguished himself as a standout basketball player and performing arts student. Dwight loved basketball and enjoyed telling everyone he met that he played basketball against Earvin “Magic” Johnson when he on the East Lansing High School Varsity Basketball team. Dwight had a great singing voice and participated in several choirs, musicals, and plays during his years in the East Lansing Public Schools. After high school Dwight attended Grand Valley State University and the University of Louisville.

Realizing the worth of the gift of salvation, Dwight accepted Christ at an early age at First Community A.M.E. Church in Grand Rapids, Michigan. When the family moved to Louisville, Dwight became a member of N Street Baptist Church and also attended Green Street Baptist Church.