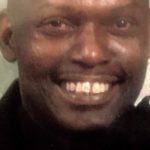 James, (Jimmy AKA Pep) was born May 3, 1949 in Louisville, KY to Mr. Johnny Peppers and Mrs. Zola Peppers. James graduated from Male High School. At a young age, he professed his faith in God in the Catholic Church. James met his wife Deborah Peppers in 1996 and on July 8, 2005 they united in marriage.

James retired from KAEC after 32 years and began working at the Yum Center and then later at Courier Journal until his health declined. James was an avid UofL fan and loved watching any sports on TV. James was a homebody but was a very loving and giving person.

James departed this life on Sunday evening December 8,2019. James is preceded in death by his parents Johnny and Zola Peppers and his eldest sister Beverly A. Sewell.