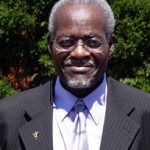 Jessie James Johnson, 92, passed away peacefully on March 12, 2021. Services will be Saturday, March 20th with visitation beginning at 11 a.m. and funeral service to follow at 12 noon at Oak Grove Missionary Baptist Church, 4033 Vermont Avenue. Interment will be in Green Meadows Cemetery.

Jessie was born on May 17, 1928 to Mary Elizabeth Farris and Frankie Johnson in Honey Grove, Texas. He grew up in church and was baptized at an early age. He joined the United States Army at the age of 24 and served his country from 1952-1957. He was a Korean War Veteran. Upon leaving the military he moved to Louisville, Kentucky.  He was employed by Rainbow Bread Company and retired from there after over 30 years of service. He was a faithful and active member at Oak Grove Missionary Baptist Church for many decades.   He was a member of various organizations in the church including lending his wonderful voice to the choirs. He served as a Deacon of the church for many years. He met his wife, Alvera, at Oak Grove and they were married for 31 years until her death. He loved to tell the story about how he moved to Louisville, Kentucky and how much he loved his family.  Jessie is survived by his step children; daughters Olevia Porter, Beverly Jackson, Tina Adams and Linder Williams; sons James Williams and Larry Williams (Dinnita), 23 grandchildren, 44 great-grandchildren, 28 great-great grandchildren and a host of cousins, nieces, nephews and friends.