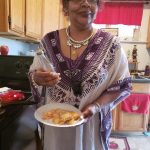 Her love and kindness spread so effortlessly throughout the community that she developed a host of honorary children, grandchildren, great grandchildren, family and friends. She NEVER met a stranger. She will be GREATLY missed.