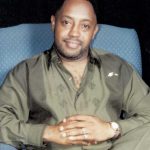 Michael was born September 10, 1950 to the late Robert Cooper and Alonza Bell Braxton. He was proceeded in death by one sister Diane Wade and one brother Anthony Ray Braxton. Michael attended public schools graduating from Central High School in 1968 and later attended college at J.C.C. and played basketball for both.

Michael worked at U of L as a supervisor in the Maintenance Department and A. D. Porter & Sons. He retired from Metro Parks. He was a DJ for several years. He joined Emmanuel Baptist Church and attended until illness prevented him from attending.

Michael is survived by a faithful companion Joan Maddox who cared for him; four children, Michael Evans, Acqinette Mack, LaDonna Reed, and LaDovrick Brown; one brother, Victor Braxton; 15 grandchildren; 11 great-grandchildren; and a host of nieces, nephews, cousins, other relatives and friends.