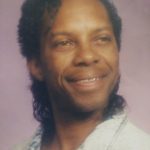 Ronald was a graduate of Central High School where he was awarded “Best Dressed” and “Best Dancer”. He was an advanced member of the Louisville Tennis Club. He played Tennis at Chickasaw Park daily until his health no longer permitted him to play. Ronald was known to many as “The Golden Boy” and often jokingly referred to himself as the “Number One Stunna”. He was loved by many and never met a stranger. He will be sorely missed by all who knew him.