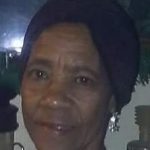 Shirley Ann Reed Wilson, 74, passed away on October 11, 2019. Visitation will be Tuesday, October 15, from 6-9 p.m. and the Funeral will be Wednesday at 11 a.m., both at Rodgers-Awkard & Lyons Funeral Home, 951 S. Preston Street. Interment will be in Louisville Cemetery. Shirley was born April 4, 1945 in Louisville Kentucky to Gilbert Ford and Evelyn Miller Ford She is the eighth child of 13 children. Shirley grew up in the Smoketown area. She enjoyed working in the nursing field and taking care of people. She spent her free time with family and friends cooking, listening to music, and dancing. She loved having fun and making people laugh. One of her favorite sayings is “Poo Poo loves you little cutie”. Shirley was baptized at an early age and believed in God has her savior Shirley was loved by everyone. Shirley was preceded in death by her husband Tommy Lee Wilson, son Ronnie R. Reed; four brothers; and six sisters. Shirley is survived by her children Gloria Reed Wilson, Ernest P. Reed, III, and James A. Reed; five step-children in Nashville, TN from her first husband Earnest Reed, Sr.; sisters, Susie Ford, and Marion Ford Pyles; and a host of grandchildren, great grandchildren, nieces, nephews and cousins.