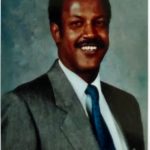 Rev. Thurmond Coleman Jr was born January 23, 1949 in Shelbyville, KY, the second child of Rev and Mrs. Thurmond Coleman Sr. Thurmond accepted Christ at age 6 at First Baptist Church of Jeffersontown where he served as an associate minister, Homebound Ministry, Prison Ministry, Director of Family Life Center, and Director of Children’s Church. Rev. Coleman later joined the Jeffersontown Christian Church where he faithfully served as an associate minister until he became too ill to attend.

Thurmond, affectionately known as “T”, attended Jeffersontown Colored Elementary school, Eastern High School, and graduated from Shawnee High School in 1967. “T” joined the United States Air Force from September 1967 to September 1971 where his tour of duty included serving in Vietnam from 1968-1969. After completing his honorable service, Thurmond obtained employment with the Norfolk Southern Railroad as special agent and retired as Railroad Detective after 28yrs.

Rev. Coleman received a Bachelor of Theology in 1982 from Simmons Bible College where he also served as the Night School Student Body President. Thurmond was passionate about many things in his life, but God and his family were his first love. He united in marriage to the former Linda Randle on February 16, 1971. To this union were born three children; Tonya Lachelle, Thurmond III, and Charles Edward Coleman who were his earthly pride and joy. He and Linda taught their children to be God Fearing and to treat everyone the way they wanted to be treated.
Thurmond was involved in many activities in his church and communities because of his love and concern for the welfare of others. Rev. Coleman continued to following the foot print laid by his father by spreading the word of Jesus Christ across the city, state, and nation.