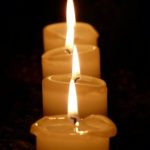 Woodard, William W. Jr., 54, a native of Charleston, SC passed away on August 1, 2014. He was preceded in death by his parents William W. Sr., and Emma Woodard. He is survived by his better half, Vicki Daugherty; and sister, A. Woodard. Visitation will be 11 a.m. Thursday, August 7, 2014 with funeral service to follow at noon at Corinthian Baptist Church, 1916 W. Jefferson Street, with interment in Louisville Cemetery. Arrangements by Rodgers-Awkard & Lyons, 951 S. Preston Street.