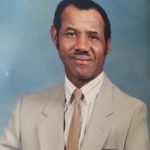 Winston Graham, 84, passed away on June 24, 2020. Visitation will be 11 a.m. to 1 p.m. Wednesday, July 1st, at Greater Israel Baptist Church, 1509 W. Magazine Street, with funeral to follow at 1 p.m. Interment will be in Green Meadows Cemetery. Winston was born on October 13, 1935 to the late William and Lizzie Lee Graham. He was preceded in death by his wife Joyce Graham, two children Winston Darnel and Tina Graham, seven siblings four sister’s Bessie Barham, Dorothy Finley, Mary Rhodes, Delores Lewis, three brother’s Joseph, Langston, and Wallace Graham. He accepted Christ as his Lord and Savior, at Macedonia Baptist Church in Elkton, Kentucky. He attended the public-school system in Todd County. He moved to Louisville in the 60’s. Winston who was fondly called Graham to everyone who knew him. Winston was a gentle giant that took charge and pride in the work he did. He loved fixing things and building stuff. He loved his Ford automobiles. He had purchased every Ford automobile that came out. Winston was a self-employed mechanic for years until he started his own shop located on 15th and Anderson. Later Winston met his wife Joyce Graham and married her on December 20, 1969. Winston and Joyce worked as a team and founded the Grahams garage located on 15th and Broadway in which he built it from the ground up and was very proud of himself. And over the years they purchased property throughout Louisville. He leaves to cherish six children Daryl (Sandra), William (Linda), Wanda, Nicole, and Jeffery Graham, Clara Brown. Three sisters Ella Hamilton, Patsy Graham, and Mildred McGuire. One brother James (Helen) Graham. A special friend who cared for him Jaquetta Green-Lee; 19 grandchildren and 32 great-grandchildren.